You can also get the results of the academic research performed by scientists on a big chunk of data. Reading a research paper is like reading a book, but in a much smaller format and with a lot of new information per page.

Recently, I started to look for and read research papers about testing in the various types of distributed systems.

That’s why I want to start a series of posts with a common title: “Paper Review”. Here I will share the most exciting papers about quality that I found.

What is a “distributed system”? In its simplest definition, it is:

It turns out that distributed systems are everywhere.

The Internet is in some way a distributed system of computers that provide information to the user.

Web / Application monolithic backend is a distributed system in a case when deployed onto multiple servers.

Backend based on microservices is also distributed system. Dozens and hundreds of microservices are working together to provide some results. And each microservice also can have multiple copies.

Blockchains are distributed systems. Underneath it is a system of many computers sending each other information about a newly added block of transactions.

If you are working in IT, you know that testing can be challenging and complex. The main complexity is that the number of test cases and the number of potential issues in the system are almost infinite.

It even gets more challenging when the system is distributed. You need to check application functionality.
But you also need to check how data is replicated between different nodes in the storage system.

You need to test any synchronization issues between nodes located in different timezones (e.g., providing user data from other CDNs).

And the main thing - you need to test how the system will behave when one or more nodes are down (restarting or broken).

It is complicated for a couple of nodes, but what can we do if the number of nodes is 100s or 1000s?

The paper “Simple Testing Can Prevent Most Critical Failures” by Ding Yuan et al. gives a good view of which failures can happen in real-world production systems.

The authors performed an analysis of critical failures of the five distributed systems: Cassandra, HBase, HDFS, MapReduce, and Redis. 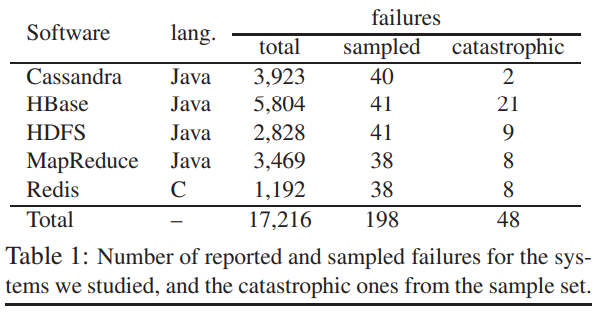 During an investigation, they reveal a lot of interesting findings. Here are the most interesting ones:

As you see, distributed systems add additional complexity to testing due to their scale. But it turns out that the most trivial testing approaches like unit testing of error-handling cases - can prevent the majority of such issues.

We, as quality engineers, should help developers to identify such potential gaps in coverage. It can be by a manual investigation; it can be by improving existing code coverage scanners.

What was your most exciting bug found in a distributed environment?