Photo by Cytonn Photography on Unsplash

Almost any tester involved in testing microservices-based systems has heard about the magic contract testing.

But what exactly are contract tests? Should you use it in your project?

In this blog post, I will talk about the case when contract testing can help. I will also compare contract testing with other types of tests and share my thoughts on using contracts in your application.

Let me introduce two characters of our story: Dave (The Developer) and Tina (The Tester). Both of them work in one Scrum team delivering a critical piece of software for a conference application. The whole backend contains hundreds of microservices.

As a good developer, Dave wants to cover new functionality with tests. The best possible way to do it - is unit testing.

So Dave implements many unit tests for checking feature functionality on the User Conference Service. All external calls to Bonus Conference service or any other resource are mocked (so Dave is responsible for defining the response values).

Dave creates more and more unit tests; the code coverage tool says that it is covered more than 80% of the new code.

Dave finishes his work with the confidence that the tests catch-all error cases and bugs. All tests are executed locally within seconds.

After Dave’s change is deployed to the staging environment, Tina starts the testing. And it turns out that the new functionality does not work at all.

The root cause of the problem is that another developer changed the Bonus Conference service API, and Dave was not aware of it at all. All unit tests check the service with the older version of the API.

Tina, as a tester, catches the broken change only after end-to-end testing of the functionality. After the root cause analysis, Dave and Tina decide to cover the broken case by end-to-end automated test. It will detect the broken API issue when the User Conference service will be deployed to the test environment.

So from the one hand, Dave has many unit tests that provide good coverage, fast feedback, and runs on a local machine.

On the other hand, the end-to-end test will provide an additional check of broken integration, but the feedback time will be slow: all services must be deployed to the test environment first.

Given the number of services (hundreds) and updates per day (thousands or more) - each developer should wait for an entire deployment to find the end-to-end test results.

Maybe there is another way of getting information about broken integration? It turns out that it exists.

Contract testing to the rescue

Contract testing is another approach to test integration between two counterparties.

These two sides can be services (communicates via HTTP REST, messaging, or gRPC calls), client and server, various third parties.

The main idea of contract testing is to provide fast information about broken integration without deploying services to the environment. Imagine it like an end-to-end test that delivers the results with a speed of unit test.

Instead of creating separate unit tests on the User Conference and Bonus conference services, Dave will start with the contract definition.

The contract defines what the User Conference service will request and what it expects to get in response.

Here is an example of the contract, using Spring Cloud Contract library: 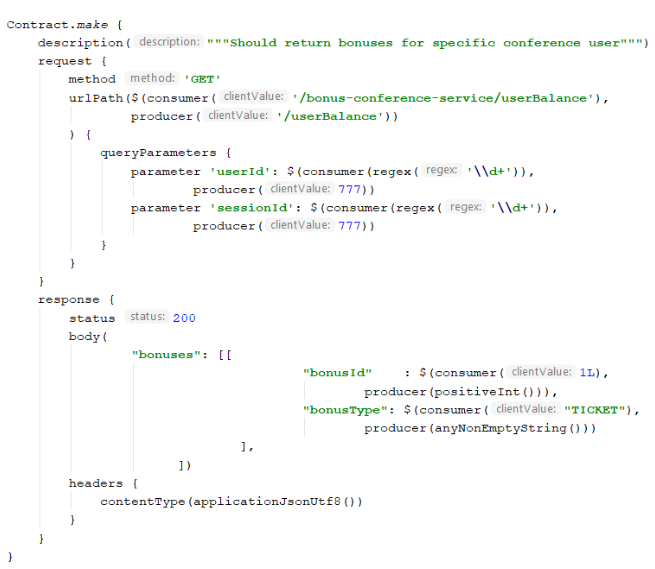 After the developer changes the contract, all consumers will be notified about the change. So they need either approve the change (handle it in their services) or comment that this change breaks the integration.

Should I use contract testing?

Contract tests are not a substitution to the unit or end-to-end tests. It is just one type of test that can be performed.

If contract testing workflow is implemented correctly - it is possible to minimize end-to-end tests and speed up the development process.

So the crucial question remains: “Should I use contract testing?”

You will not get a value from the contract testing if:

Contract tests are not a “silver bullet” which provides only the benefits.

It requires many efforts for configuration; it requires even more efforts to change the developer “culture.” With contract tests, you can’t make hidden changes, silently push it and close the Jira as soon as possible.

And most important: contract testing forces you to think more about the consequences of each change that goes to production.

Have you already tried contract testing for your projects? Did you get any benefits?