Photo by Terry on Unsplash

Blockchain is a linked list of records called blocks.
The blocks are connected using cryptography: each block contains the previous block’s hash and information about current transactions.

The blocks are immutable to change and are replicated across nodes in the blockchain peer-to-peer network.

The most famous blockchain implementation, for now, is Bitcoin. But blockchain is not limited only to cryptocurrencies.

As blockchain provides immutability, integrity, and transparency, it can store any data, not just transactions. Since the beginning of the Bitcoin release, many companies are constantly exploring new ways to apply blockchain to the current processes in the world.

The creation of smart contracts in Ethereum allowed simulating many business processes on the blockchain in a code (with either manual or automatic execution). As a result, now it is possible to build Blockchain-Based applications that allow communication with a given blockchain to store data, make transactions, or execute smart contracts.

All these blockchain applications deal with currency (tokens) or store and keep data on the chain. So we need not only build them but also ensure that the applications work as expected (from functional, performance, and security points of view).

In this blog post, I will describe the challenges in testing blockchain-based applications based on my experience and also a tremendous research paper of Chhagan Lal and Dusica Marijan - “Blockchain Testing: Challenges, Techniques, and Research Directions.”

Modern blockchain-based applications do not implement blockchain “from scratch”. They typically use blockchain networks as one of the components of the system.

Here is the sample architecture diagram of the blockchain-based application: 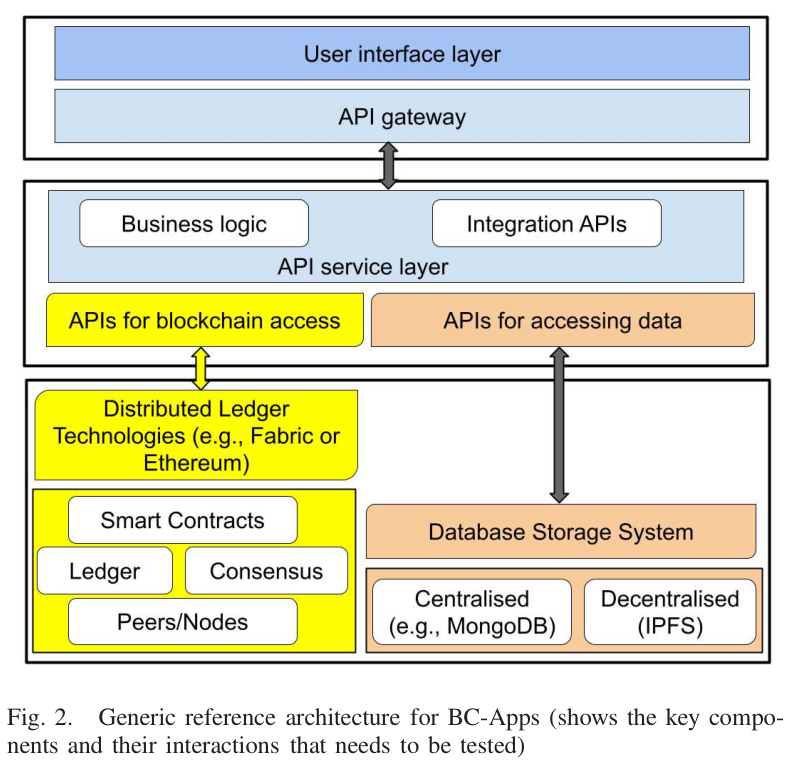 According to the diagram, the following components need to be tested:

As blockchain and smart contracts is a reasonably new technology, test engineers face with several challenges during testing blockchain-based applications:

Lack of practices (development and testing)

Variety. For now it is almost 40 different blockchains available on the market. You can’t just “learn” one blockchain: there is an ecosystem of tools for each particular blockchain. Some blockchains use well-known programming languages like C++, Go, Javascript or Java for implementing smart contracts. Another - use their unique programming languages (Solidity for Ethereum or Plutus for Cardano) - so you need to learn them too.

Standards. Additionally, there is a lack of guiding procedures, standards, or strategies in designing, developing, and testing blockchain-based applications

Libraries. As there are many programming languages for smart contracts - there is a lack of mature debugging / testing tools for these languages.

Automation. If you want to ensure that the application works as expected, you need to test the components (in isolation) and system (as a whole). Currently, there is a lack of deployment and automation tools, which allow to deploy and configure blockchain in a “test mode” within one machine’s boundaries.

The blockchain is an immutable and open data structure (unless it is not a permissioned one). So as soon as any change is deployed to the network, you can’t reverse it back.
Seriously. All the test data will remain on the chain forever :).
Moreover, the test data can be seen by any person via transaction explorers.

Test data need special care as it is available in a public blockchain. Make sure that you don’t use any sensitive information in tests.

Validate smart contracts more and more before deploying them to the chain. Any error that slipped to the contract after the deployment can’t be fixed easily - in some cases, you need to create another contract to send money back to the failed accounts (or even change the whole network after a hacking attack).

You can’t delete the data from the chain. So, if your application needs to follow GDPR (right-to-be-forgotten in particular), you need to consider which data to store.

Transaction validation time depends on a particular chain’s consensus protocols - in some cases, it can take minutes or even more for storing one piece of data.

Real-world blockchain workloads are hard to predict due to volatility in blockchain popularity, hacking attacks, and other events.

Fault-injections is a powerful technique in testing highly distributed systems. But due to the dispersed nature of the blockchain systems, it is hard to separate between system level, network level, and user-level fault loads. So there is a lack of tools in this area - mainly because each blockchain has its APIs and components.

Blockchain-based applications give a new set of challenges to the testing world. You need a whole lot of knowledge and skills.

But no worries. Imagine, somewhere like 20 years ago, nobody knows how to implement automated tests for web and mobile. There were times when Selenium Webdriver or Appium does not exist.

If we, as testers, want to succeed in the blockchain world and bring quality “to the table,” - we need to dig into technical aspects of the systems and apply known (and maybe yet unknown) testing techniques and tools.

We will explore functional, performance, and security challenges and tools in more detail in the following posts.