Photo by Jeswin Thomas on Unsplash

Why is it testability?

At first glance, the typical test engineer already has enough things to do:

Somewhere between these things, you still have to find time for automation. And you still need to make a demo for the customer.

Why even bother with that testability?

Isn’t that the task of whoever writes this code? Is it possible for a test engineer to influence the team (especially the architects and developers) - and make the software a little more open and easy for testing?

Let’s try to figure this out a little together.

Testability: officially and not so much

What is the definition of testability given by industry standards?

According to ISO/IEC 25010:2011: Testability - degree of effectiveness and efficiency with which test criteria can be established for a system, product, or component, and tests can be performed to determine whether those criteria have been met.

According to ISTQB terminology: Testability - The capability of the software product to enable modified software to be tested.

In simple terms, testability is how convenient and easy it is to test an individual component and the entire system.

Testability at the code level

To efficiently test classes at the module level, you need to be able to create Mock objects for all class dependencies.

If the developer applies the Dependency Inversion principle, there will be significantly fewer testing problems. Ideally, you need to pass all dependencies through the class constructor.

Also, don’t forget about observability and controllability, even at the class level. The developer (or test engineer) must be able to see the state of critical parts of the object at any time. It would be much better to add different methods to get this information directly to the test class.

But still - this aspect is entirely under the responsibility of the developer.

Testability at the architecture level

A practical tip at the architecture level would be to separate infrastructure and domain code. By domain code, we understand all the code responsible for business logic. Infrastructure code works with external dependencies - databases, message queues, third-party services, etc.

To separate one type of code from another, you can design components using the Ports and Adapters (Hexagonal) pattern. Alistair Cockburn proposed this model in 2005. 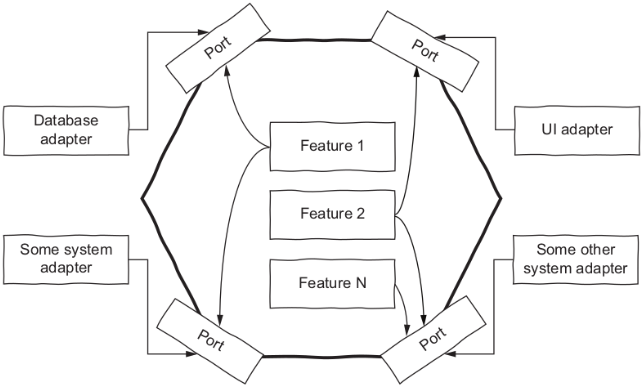 Maurício Aniche gives a more practical example of such a model in the book Effective Software Testing:

Testability through the eyes of testers

Okay, but how can a particular test engineer affect testability?

If you’ve written more than one UI test, you can tell a lot about the pain of “long and fragile” locators. Changing the elements on the page is one of the main reasons for the instability of such tests.

As a test engineer, you can do two things in this case to improve testability:

Having an special property like “automation-id” or “data-id” for a web element - saves a time and nerves for a test engineer.

Please keep track of how convenient it is to test the component in isolation. Ideally, a developer or tester should isolate a single part (e.g., a single microservice) and test only the business logic.

You can always work together with a developer to build such tools for the components of your system. In many cases these tools can be find as libraries. If not - it is a good point to create it and spread as inner source in the organization.

It is good to analyze how you test (from time to time). Some components in the system may work using probabilities or specific third-party data. The tests for such components will be unstable. But such systems should be tested and, ideally - automated as well.

In search of the answers, we can think of it as a system of saves in a computer game. Imagine that you need to test how the “boss” behavior at the end of the level. You can verify it by playing the whole level from the start till the end. If we talk about one or two minutes - it is ok. But if each level in the game takes even ten minutes or more - such tests quickly become unrealistically long.

A better way will be to use magic save, reach the end of the level and test exact behavior.

The solution is to make a separate test API that will allow you to bring the system to one or another state. Using such API will make tests faster and increase the stability and predictability of the system under test (at a certain level).

That is the reason why many games have a long list of cheat codes.

You can think about such a “cheat” system in the context of your application. These can be special commands you need to enter or separate ways of creating data that the system will process as a test (even in production). Such data will then be easier to filter and analyze.

And how do YOU improve testability on your project?