Photo by Mauro Sbicego on Unsplash

This is the second blog post in the “Blockchain for Test Engineers” series.

In the previous post we talked about Hashing. Today we will dive into a fascinating world of ciphers and encryption in this post.

The message to a friend

So you want to send a message to your friend.

If you write it in a letter and send it using your local post office - there is some chance that someone can steal the letter and read the message. The reason is that message is written in plain text. But you need to keep the message private - so only you and your friend can read it.

You need a piece of paper, a box and a lock with two keys. You write a message and put it in the box. Then, you lock it with your key and pass it to the carrier. The carrier will bring the box to the friend. Your friend will use their key, open the lock and read your message. Hooray! Looks like the puzzle is solved.

But we have some weaknesses:

But in our global world, your friend can be in another city or even on another continent. Also, if you will understand that the lock is broken, you need to exchange a new portion of keys with your friend.

Maybe there is another way to transform your message into a non-readable way, send it to a friend and return it to the original form?
Even in ancient times, the military forces tried to invent ways to communicate reliably and securely.

Thus a new science has emerged - cryptography. Cryptography - is a study of techniques for secure communication in the presence of adversarial behavior. The science consists of two parts: one that studies ways of hiding information (encryption) using ciphers, and the second (cryptoanalysis) - is the study of breaking those ciphers.

Before we move to the ciphers, let’s define a few terms: 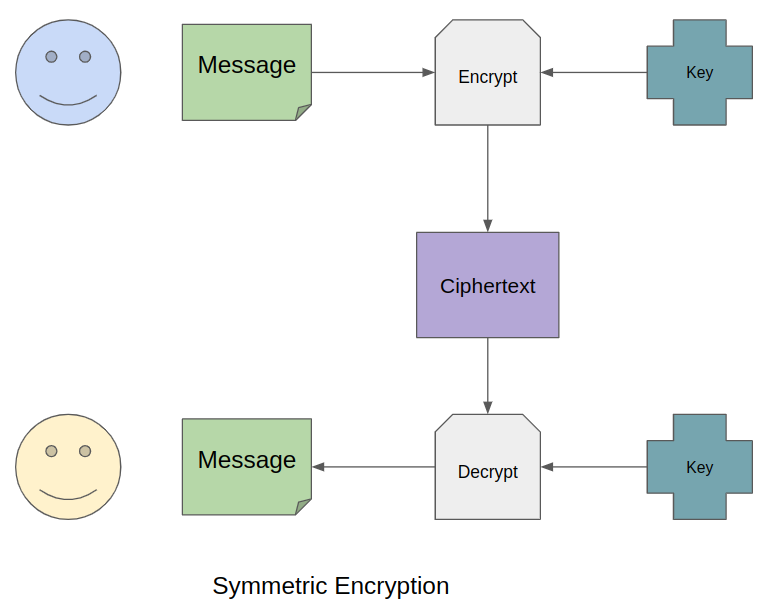 The essence of symmetric encryption is that the same key is used for encrypting plaintext and decrypting it back. You can quickly get the initial message if you have a key, ciphertext, and you know the cipher.

For example, one of the well-known symmetric ciphers is Caesar’s cipher. The cipher was invented by the ancient Roman emperor - Julius Caesar. The essence of the algorithm is to use an alphabet with a slight offset from the start. The algorithm was so popular that it was considered “unbreakable” for a few centuries.

In the modern world, of course, the letters in the alphabet do not move. Usually, they use the bitwise XOR operation (exclusive or) and a massive number of bit conversions, shuffles, and substitutions over many rounds.

Symmetric ciphers also can be divided into two groups:

The main drawback of symmetric encryption is that the same key is used for encrypting and decrypting the message. If an attacker collects many ciphertexts encrypted by the same key, the chances of breaking the cipher - will increase.

As a countermeasure to guessing the key and breaking the code, the WWII military used a particular thing - a one-time pad. 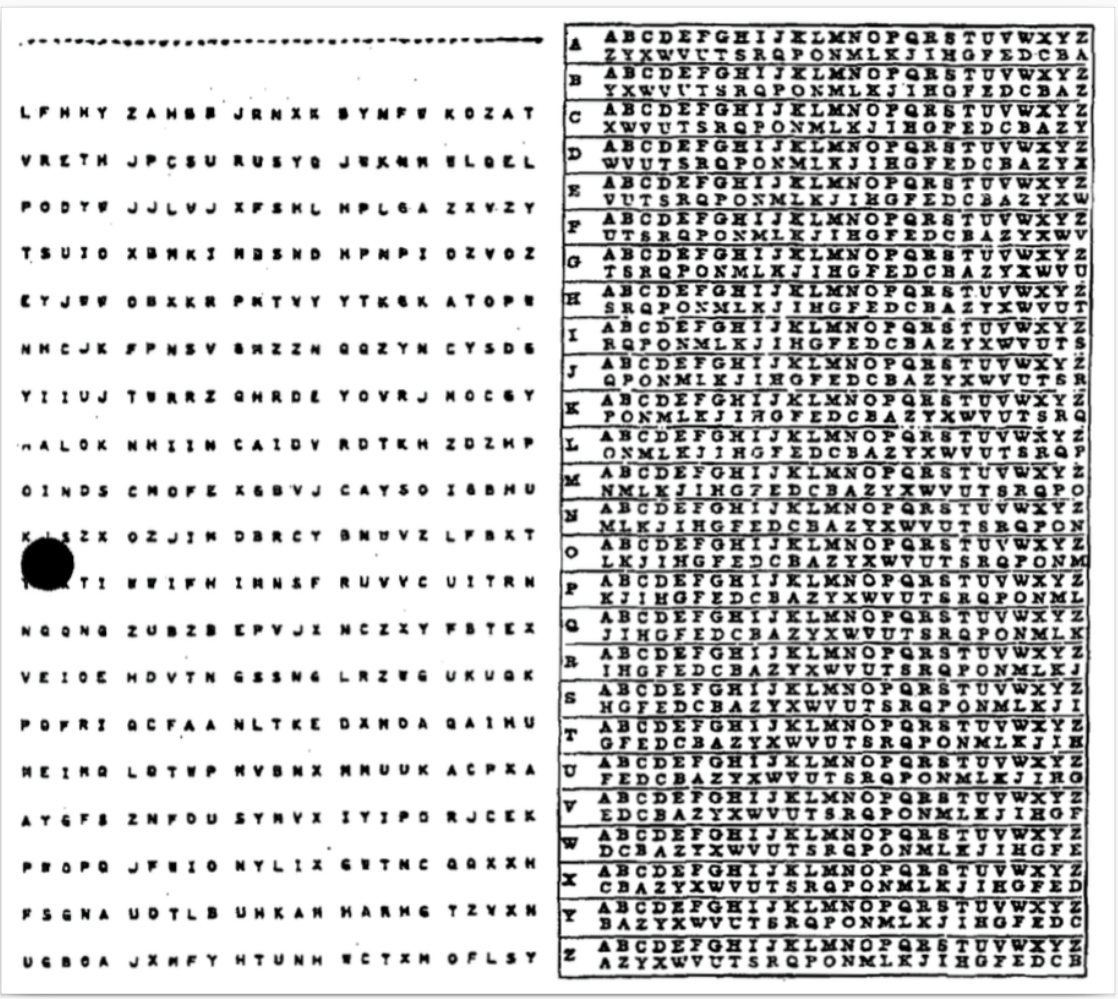 It is a technique that allows encrypting each message with a new key (for a relatively long time). Before exchanging the messages, you need to prepare a big pad with pseudo-randomly generated letters or digits. It might be a person who gets a random letter from a pile of letters. Then those big “randomly” generated pads should be securely distributed between the army divisions. If any of such pads are lost - it can compromise communication.

This approach is not easy to break. But the main drawback is that you need to prepare and distribute a lot of such pads. And you need to do it constantly - because the communication during the war is intense.

So the approach is reasonable but not practical enough.

Let’s return to the “message and box” analogy from the beginning of the post.

You have the message, the box, and the lock with keys. But this time, the keys are a little bit different. One key can be used only for locking the box. The second one - is only for opening the lock.

So to send a secure message, you put it in the box, lock it using locking key and send it to the friend. Your friend then opens the lock using the second key and reads the message.

This is the essence of asymmetric encryption: rather than using one key on both sides of the communication channel, we use one key (public key) for encrypting and the other (private key) for decrypting the message. 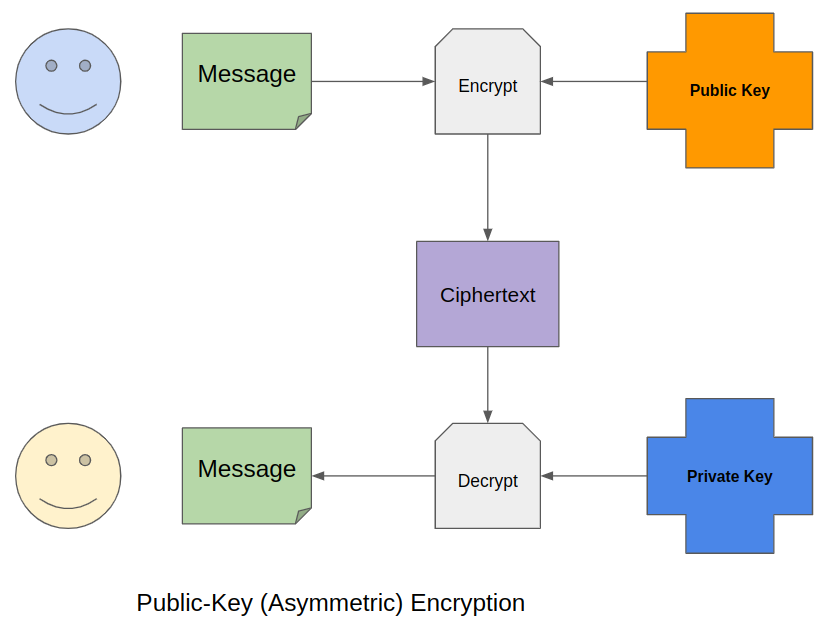 The idea of ​​asymmetric encryption is based on one-way functions. These functions are easy to apply to a number, but it is complicated to calculate the original number from the result. This idea came to the mind of two scientists, Diffie and Hellman, in the 1970s. Together, they came up with the first asymmetric encryption algorithm.

For example, taking two large prime numbers and multiplying one number by another is a straightforward task. And now try knowing the result - to calculate (or instead pick up) the original two numbers? This is already a difficult challenge.

What are the pros and cons of asymmetric ciphers?

Pros: The key exchange can be carried out even over an open communication channel. An attacker, knowing the public key, will not be able to decrypt the message.

Cons: With asymmetric encryption for communication, both parties need to exchange public keys. Plus, the speed of encryption and decryption is more significant than in symmetric ciphers.

What are the examples of asymmetric algorithms?

Where encryption is used in the modern world?

How to test the encryption algorithms?

Symmetric encryption algorithms are compared in terms of the number of rounds, the length of the key and block, and the complexity of transformation and implementation. Their avalanche effect is also compared. The primary indicator here is the cryptographic strength of the algorithm (how hackable it is). A cipher can be substantial if it takes so much time and resources to break it that the information becomes irrelevant after breaking it.

The whole protection lies in the fact that it will take an attacker a lot of time and computing resources to brute-force iterate through all possible values of the key.

Therefore, the longer the key, the less vulnerable the encryption is to hacking. Even the RSA algorithm with a key of 1024 bits is no longer considered reliable enough in modern systems. It is better to take 4096 bits.

Another way how to compare encryption algorithms - is by their speed.

Encryption and cryptography is an incredibly vast topic to cover in one blog poost and even in one book. If you really interested in diving into the story of the ciphers in human history - I can recommend a great book by Simon Singh - “The Code Book”.