Photo by David Nitschke on Unsplash

This is the third blog post in the “Blockchain for Test Engineers” series.

In the previous posts we talked about hashing and encryption. Today I will show you what is digital signature and how it is used in the blockchain world.

The purpose of digital signatures

Last week we learned some methods for hiding the transmitted information from third parties. It is - encryption (symmetric or asymmetric).

But even if the message is encrypted, other problems need to be solved:

What is digital signature

In a real world, if you make a contract deal - both parties need to make a signature on the documents. It will prove, that you have read the documents and agreed about the content. In the the digital world it is a bit different.

A digital signature - is a special mathematical algorithm that allows checking the authenticity and integrity of messages.

Digital signatures are built based on symmetric and asymmetric encryption. Asymmetric one is used more widely.

The digital signature scheme was first described by the creators of asymmetric encryption - Whitfield Diffie and Martin Hellman, in 1976. RSA algorithm can be used for creating a primitive version of digital signatures.

How does a digital signature work? 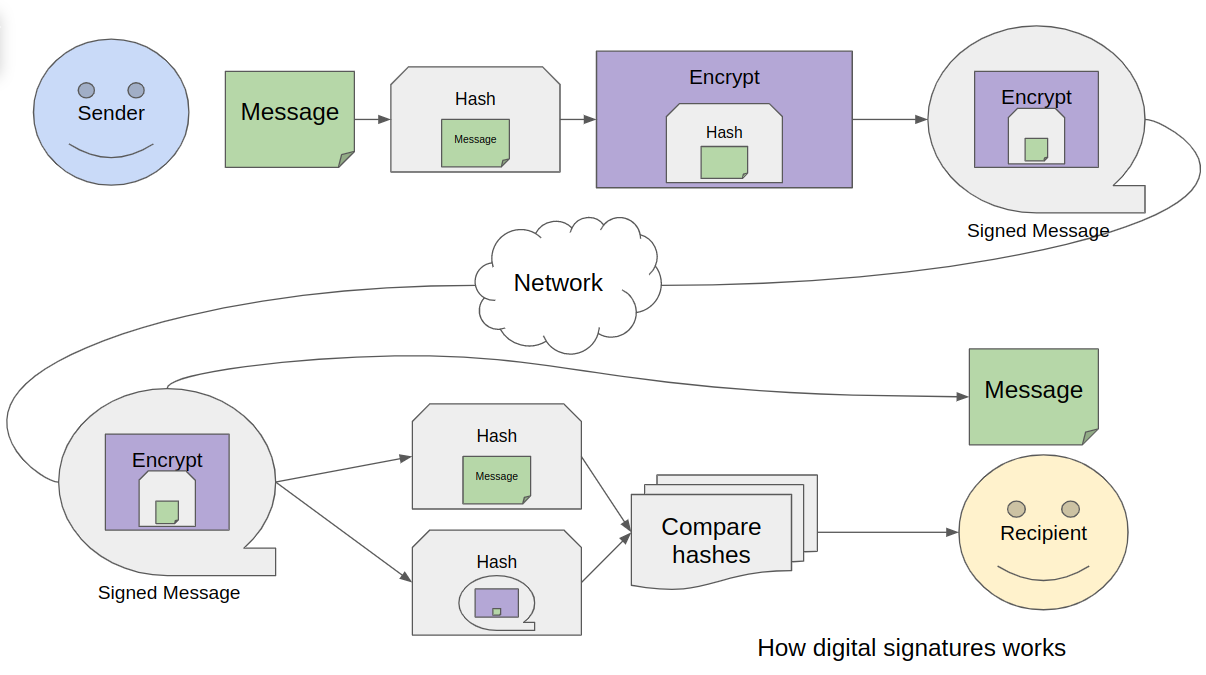 In the simplest form, the digital signature of a message is a combination of encryption and hashing:

There are a lot of different algorithms for digital signatures.
Some are - RSA-PSS, DSA, ECDSA, Rabin signature, and Schnorr signature. Each algorithm has its own strengths and weaknesses.

Every time you make a new transaction in the wallet, “under the hood,” the transaction is signed with your key. Then, in the blockchain, you can check who created one or the other transaction.
Additionally, each new block is signed by a miner of this block.

So everybody in the blockchain can check and prove that particular transaction was sent by a user with the correct private key.

But what about well-known blockchains?

Bitcoin initially used the ECDSA algorithm for signing transactions. A couple of years ago, this algorithm was replaced, and now transactions can be signed using the Schnorr signature. The algorithm itself is fascinating - I will tell you more about it in the following notes.

How can digital signatures be compomised:

It is good thing to discover a new concept. But completely other thing - to try it practically.

As a part of this blog post, I want to tell about tools, that I use personally for digital signatures in my day-to-day work.

The open encryption standard OpenPGP exists in two implementations PGP and GPG (GnuPG). If the first one is closed, then any user can install the second one on his computer (both in Unix and in Windows). Installation of the utility is described here.

Here is the cheat sheet of basic commands:

If you don’t like the command line, other more user-friendly tools are available. One example is Mailvelope.

You can install the Mailvelope plugin for Google Chrome (also available for Firefox and Edge). Using plugin, you can do the same thing as with gpg - but even more easy. You can read about how to install and configure this plugin here.

I personally can say that this plugin is very comfortable. Its paid version integrates with Google Gmail - and allows you to encrypt and sign emails (and automatically decrypt them) without switching between third-party tabs and windows.

Digital signatures is a very useful and powerful concept. It helps to sign documents anywhere in the world. It helps to check messages and provide secure communication. It also helps to check the validity of transactions and blocks in the blockchains.

And another interesting thing.
Did you notice, how the new knowledge is built on top of the previous concepts? Without knowing about hashing and encryption it is hard to understand how digital signatures works.
That’s why it is good thing to learn new things and connect it to already known parts. You can build your own knowledge maps.